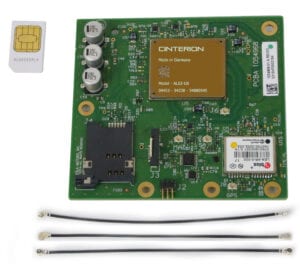 What is this all about?

Each Tesla Model S comes with free internet which is super helpful for use of onboard navigation.  Older versions of Model S operate on a 3G network.  Current models have 4G LTE network connectivity.  Model S owners stuck with the slower 3G connection can upgrade to 4G by having a module replaced in the Media Control Unit (MCU).

Tesla Model S | X as of June 2015 for North America include the new LTE hardware. Some cars a few weeks before June 2015 may also have LTE.

To perform the upgrade, the center display must be removed, a fairly complex process requiring much of the dash to be disassembled.  The 3G/GPS module inside the display module is replaced with a new 4G/LTE/GPS module.

All cars as of June 2015 for North America include the new 4G LTE hardware. Some cars a few weeks before June 2015 may also have 4G LTE.

Since this new 4G/LTE/GPS module will be handling a lot of functions, it comes with a SIM card shown.
Included are also three mini coax connecting cables.

What advantages does the upgrade offers:

The biggest difference comes from the (significantly) reduced latency on LTE networks.  This is particularly true for map downloads.

If you regularly use maps, or native music streaming, go for the 4G upgrade

In other words, when you touch the map or start a song on a 3G Tesla, there’s a lag where nothing happens.  That lag is shorter (or virtually gone) on 4G LTE networks.   Advantages are faster maps updating and navigation searches or native music streaming.

Here are other compelling reasons for upgrading to the 4G LTE module:

If you are able to bring your car to our Phoenix Arizona Service Center, we can perform this upgrade in shop. For out of state customers we are able to ship the 4G board at a price of $154.50 plus shipping.

As always, our Tech Support lines are staffed and available for assistance.

Watch our YouTube channel for a pending instructional video on how to retrofit your Tesla MCU.