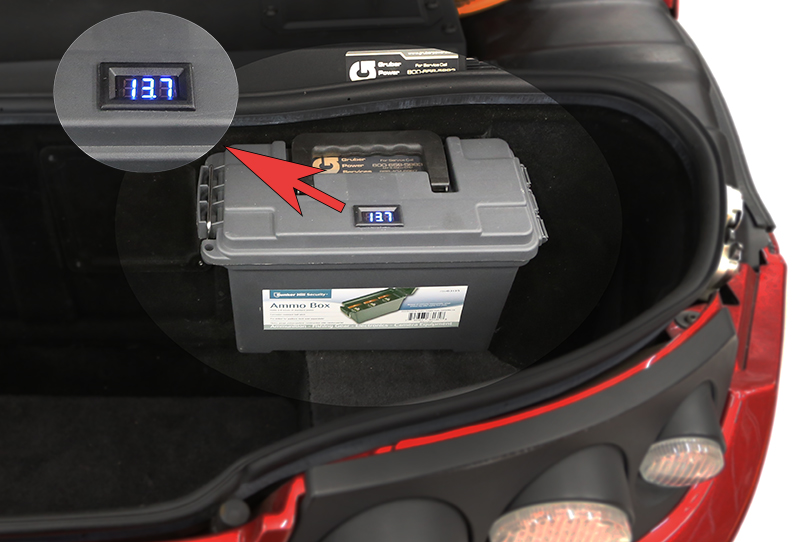 This conversion moves an inaccessible 12 Volt Battery to the trunk, reducing replacement time from hours to minutes.  A voltmeter displays charge status, and gives early warning when the battery is due for replacement (anything over 13 VDC indicates a healthy battery).

Instead of disassembling the passenger wheel well for battery replacement, a battery swap takes less than 3 minutes.

Where is the 12 volt battery? 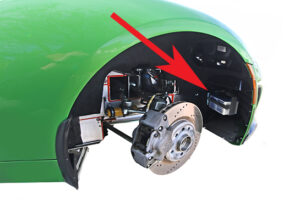 The purpose of the 12 volt battery in a Roadster is to power most of the electronics ranging from headlights, audio system, fans, and modules fed by 12 volts.

The 1.5 series Roadsters, 2008-2009, did not have a 12 volt battery, and the source of power for these devices was on of the first two sheets in the ESS pack, which ended up being a design problem since it unevenly wears out two sheets out of 11.  By the 2.x series Roadsters, a 12 volt motorcycle battery was inserted fed by the output of a DC-DC converter which derived its power from all 11 sheets.

This battery location was a compromise at best, and limited accessibility makes replacement a trip to a Service Center.

Here is really where you want the 12 volt battery 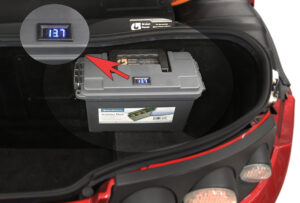 By relocating the battery into unused trunk space, a battery swap becomes a 3 minute DIY effort.

A voltmeter provides continuous display and early warning when the battery is due for replacement.  The output of the DC to DC converter will maintain this battery at a float charge of 13.6 Volts DC.  Voltages below 13 volts DC indicate it is time to replace the battery.

The GPS battery supplied with this kit is superior to the 8 Amp Hour motorcycle battery, by providing 4 more Amp Hours of power, and has quick disconnect tabs making replacement a cinch. 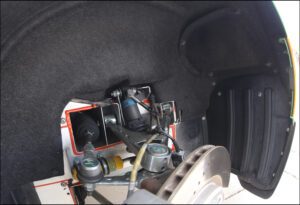 Turn off the APS through the VDS screen diagnostic menu.  This removes 12 volts from the circuit you are about to work on.

To gain access to the old 12 volt battery, remove the wheel, the access panels shown, and the fender skirt using 10mm socket wrench.

Make sure to pay attention to the jack point decal under the Roadster. 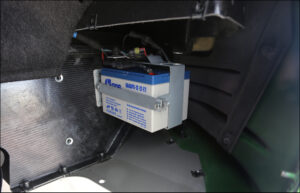 Disconnect both plus and minus wire.

Cut off both terminal lugs.  Strip back the wire about 1/4″.

Both will be crimped onto the battery extension cable later.

Splice in the extension wires 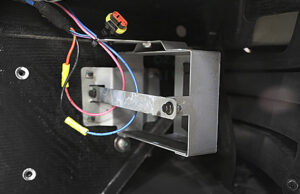 Disconnect both plus and minus wire from the old battery and remove.  Observe polarity crimping black extension wire to minus (-) and red wire to plus (+).

Using a connector crimp tool, and the supplied butt splice connectors, crimp them onto the stripped back portion of these wires in preparation of splicing in the extension wires to the trunk.

Finally, crimp the Red and Black extension wires onto the butt splice connectors. 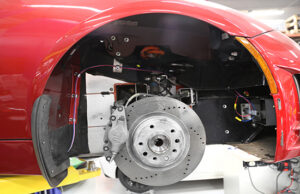 Route the heavy gauge 30 Amp extension wires around the fender wheel well as shown, clamping securely away from any moving suspension components.

Use tiewraps and supplied clamps as shown.

Use the running board below the door sill as a chase 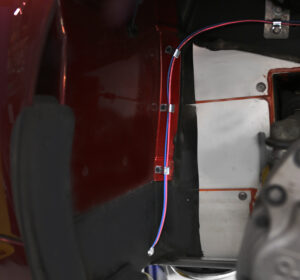 Drill a 3/8″ hole into the running board cavity as shown.

Using a fish tape, or stiff metal wire, start pushing the fish tape into the hole, until it protrudes from the rear fender well.

Tape the extension wires onto the fish tape, and pull the wire through to the rear. 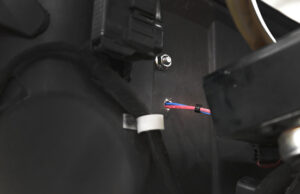 Route the extension wires from the front wheel well avoiding any suspension components, under the PEM. 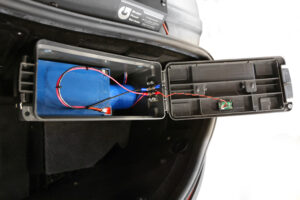 Route in the extension wires from the rear, trim excess wire, and terminate and crimp the spade lug terminals supplied.

Observe polarity keeping plus (+) and minus (-) wires together on the terminal block inside the battery box.

As always, call us for tech support or pre-sales questions.  We also have a YouTube video describing this installation process