2003 – Martin Eberhard provides funding to AC Propulsion to convert one of three Tzero vehicles built with Optima Lead Acid batteries to “Laptop Batteries” (18650 Lithium Ion Cells) which increases the range from 80 miles to 300 miles boost the 0-60 time to a blistering 3.6 seconds exceeding acceleration of a Ferrari 355, Porsche 911s, and Corvettes.  In 2017, Gruber Motor Company purchased one of the Tzero vehicles, the only one still functioning, for reverse engineering and promotional purposes.  This car saw a fair share of track time in its day, and that it actually beat the legendary Lamborghini Countach supercar in a track event in 1997.

2004 – Elon Musk joins Tesla as an investor and by 2005, they were creating “test mules”. Collaborating with AC Propulsion, they were making analog drivetrains to insert into a Lotus Elise chassis. A couple of these mules were used internally to validate the technology, and then retired.

2006 – Tesla made about ten engineering/evaluation prototype Roadsters. These were shown off to early customers & press, put through extreme testing, then mostly retired from service.

2007 – Abandoning the analog AC Propulsion inspired drivetrain was a “Hail Mary” attempt to go digital, use new IGBT’s, switch to a single speed gearbox with taller gearing, all to achieve the promised 0-60 by way of much more low end torque. Tesla makes 14 Validation Prototype (“VP”) Roadsters using the newly developed digital drivetrain. These continued to be shown to the press and used to evolve components as they prepared for Roadster production in 2008.

2008 – Martin Eberhard left Tesla in January. By March 17, regular production commences, with a goal of producing 100 vehicles per month, “marking an historical milestone for Tesla Motors and a watershed in the development of clean, zero-emissions vehicles”. The 2008 models sell out quickly, and reservations placed for 900 2009 Tesla Roadster.

2012 – Ultimately, a total of 2,450 Roadsters were sold between 2008 and 2012. Toward the end of production, the following statement was made, “Tesla will stay true to its original commitment that the Roadster’s limited production will help make it a collector’s item. ”

Why use an AC Motor 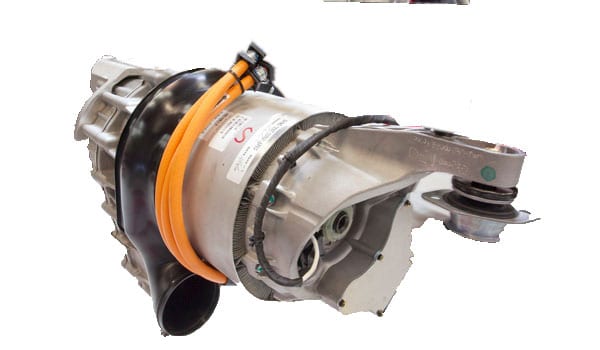 A fundamental reason might be that it would be peculiar to name the vehicle a Tesla and not use a Tesla motor in it. One might also ask – If you have a huge DC storage battery pack in a car, why not insert a DC motor rather than convert all the DC energy to three phase AC through an inverter (PEM) with efficiency losses during the conversion?

Nikola Tesla patented the AC induction motor in 1888. He found there are few key advantages over DC motors. These advantages explain why every commercial electric automobile uses AC motors (except for most golf carts).

A three phase AC induction motor is one of the most efficient rotating devices made. There is a 120° relationship between phases creating a rotating magnetic field. This field “pulls” the rotor (part that spins) which eliminates start windings, and boosts efficiency. Induction motors use short-circuited rotors which follow the rotating field of a stator.

AC induction motors don’t have any brushes. Brushes are made out of soft carbon and like brake pads, wear over time, require periodic adjustment and replacement, and create wear on a commutator, the copper pads on the armature or rotor. AC motors and controllers stall the motor when they fail. DC motors can fail shorted which can cause the vehicle to run away.

A common question we are asked is what the “password” is to gain access to the maintenance/diagnostic screen in the Tesla Roadster.

Do NOT follow this link or you will be banned from the site!